Is your child obese? You are not alone. Statistics show that one in four children are overweight or obese. Obesity is among the most common preventable medical condition affecting children in developed countries. It has a profound effect on children's life. 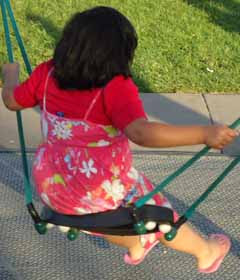 Some shocking facts about childhood obesity.

What is childhood obesity?


A child is considered to be obese when his or her body weight is significantly over the ideal body weight for height. In general, if your child's weight is 20 per cent or more in excess of the expected weight, he or she is obese.

Growth charts are used to monitor height and weight in children. The 50th percentile line is the average weight for the corresponding height. For example; imagine a child's expected weight is 20kg. His actual weight is 26 kg. This is 30 per cent more than the expected weight. So the child is considered to be overweight.

Body Mass Index (BMI) is less accurate in measuring obesity in children. However,there are special BMI charts available that are corrected for age. These BMI charts are designed to take into account normal weight gain during periods of growth. Separate charts are used for boys and girls.

In addition, it is recommended to take children's waist circumference to get a more accurate picture.


The risk of becoming obese is determined by both genetic and environmental factors.


Some children are genetically more susceptible to gain more weight. The fact is, if one or both parents are overweight, there is more chance their children become obese.

The genetic link was demonstrated by the results of studies involving identical twins who were raised apart. It is concluded that the contribution of genetic factor is about 40 per cent.

A study of 300 children with severe obesity by the University of Cambridge concluded that loss of a key segment of DNA can be a cause for obesity in children.


Fast food:  Over-consumption of fast food is one of the main cause of excessive weight gain in kids. Majority of fast food items are loaded with fat. They are often super sized portions. So they invariably contain large number of calories. Here are some shocking facts about fast food.

Unhealthy snacks: Children usually get hungry long before the next regular mealtime. So they tend to eat snacks more frequently. Choosing snacks that contain large amounts of sugar such as candy, chocolate, and cakes results in gaining too much body fat.

The soft drink culture: Soft drinks are everywhere and they are a real problem. Fizzy drinks constitute the leading source of added sugar in the diet. Vending machines are part of the soft drink culture. children are easily able to buy Coke, Pepsi, and Fanta with their pocket money. These drinks are often cheaper than a bottle of water.

Fatty foods: Eating too much fat can be a cause of obesity in children. However, fat is a necessary part of a healthy diet. Kids need essential fatty acids for their growth and development. Too much restriction of fat in kids diet is not a good idea. It is essential to ensure your child gets an adequate amount of healthy fats such as omega 3.

High GI food: GI or Glycemic Index is a ranking of carbohydrates based on the extent to which they raise glucose levels in the blood. The scale is from 0 to 100. Food with high GI cause rapid fluctuation in blood sugar levels.

Consumption of meals composed of mainly high GI foods causes inappropriate insulin response, which results in increased hunger. Consumption of high GI diet has been linked to over-eating and obesity.

Inadequate physical activity: Less amount of outdoor activities is clearly linked to excessive weight gain in children. Nowadays, kids do not get enough exercise to keep them fit. They do not burn enough energy from the food that they are eating.

Children who don't get enough exercise tend to put on weight on their bellies. They will develop apple shape bodies. This type of fat distribution is called central obesity, which possess greater health risks.

Television and video games: The link between TV viewing and childhood obesity is well established. Television and computer games promote weight gain not only because they take the place of physical activity, but also by increasing food intake. Television viewing encourages unhealthy snacking.

Stress and emotional factors: Excessive stress is a strong risk factor for obesity in children. Kids tend to eat more when they are stressed. They eat comfort foods such as lollies, candy, and chocolate to relieve feelings of discomfort and distress.

In addition, cortico-steroid hormones produced when we are under chronic stress encourage the formation of fat cells in the body.


Overweight weight children as compared to children with normal weight are more likely to develop health problems. They tend to grow into obese adults. For example; one study found that about 80 per cent of children who were overweight were obese at the age of 25.

These children often suffer from psychological and emotional problems. They are often teased and bullied by their peers. this can lead to low self esteem, learning difficulties, and behavioral problems.

Ways to help your child maintain a healthy weight.


It is important to help your children to have a healthy body weight. The whole family should be involved in the process of making healthy changes in eating habits and physical activity.

Here are some tips to prevent excessive weight gain in children.


Obesity is a preventable condition. So, act now and help your children have a healthy life.

Your weight is over the limit. You find it difficult to do your day to day activities. Your knees hurt when you walk. Your friends tell you...